The happiness of a dog with a ball in its mouth / Bruce Handy ; illustrated by Hyewon Yum. 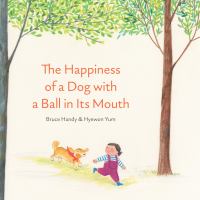 Search for related items by subject

The Happiness of a Dog with a Ball in Its Mouth
by Handy, Bruce; Yum, Hyewon (Illustrator)
Rate this title:
vote data
Click an element below to view details:

The Happiness of a Dog with a Ball in Its Mouth

Bruce Handy is an author, journalist, essayist, critic, humorist, and editor. The Happiness of a Dog With a Ball in Its Mouth, publishing with Enchanted Lion in spring 2021, is his first book for young readers. He is also the author of Wild Things: The Joy of Reading Children's Literature as an Adult, published in 2017 by Simon & Schuster. Handy has also worked as a writer-editor at Vanity Fair, Time, Esquire, and Spy and has contributed to the New York Times Magazine, the New York Times Book Review, New York, and the New Yorker, as well as other publications that don't have New York in their titles, including The Atlantic and the Wall Street Journal. He currently lives in New York with his wife, the novelist Helen Schulman. They have two mostly grown kids.