To Carnival! : a celebration in Saint Lucia / written by Baptiste Paul ; illustrated by Jana Glatt. 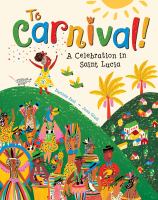 Search for related items by subject

To Carnival! : A Celebration in St Lucia
by Paul, Baptiste; Glatt, Jana (Illustrator)
Rate this title:
vote data
Click an element below to view details:

To Carnival! : A Celebration in St Lucia

Baptiste Paul grew up in Saint Lucia, where at age seven he propagated a root cutting that still produces breadfruit for his family. He holds an Environmental Science degree and is the author of The Field , which received multiple starred reviews. He is also the co-author of I Am Farmer , with Miranda Paul. Jana Glatt's fascination with creating character, costumers and scenarios began in her childhood theater classes. Today, she feels like a director of a great scene when she is creating her illustrations. Jana has illustrated more than twenty books and has been seen all over the world. She lives in Rio de Janeiro, Brazil.